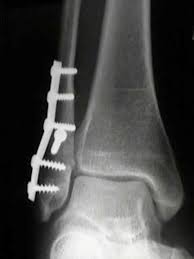 This is a picture of a healed high fibular fracture with  fracture callus surrounding the fracture site.

Intraop Pic of Lateral Malleolar Avulsion fracture before and after screw fixation.

These are pics of a patient one of our physicians saw after a gun shot wound to the ankle shattered his fibula. The following images are CT scans in different planes illustrating the fracture of the medial malloelus that does not have significant displacement.

The CT scans below show a medial malleolar fracture that is comminuted with displacement that does neccesitate surgical repair for adequate healing and avoidance of long-term complications.

For the rest of the article, please click here.