The peroneal tendons are two strong tendons that connect the muscles on the outside of the leg to the bones in the foot.  They run behind the bone in the ankle called the fibula.  When they contract they move the foot down and out.  They play an important role in stabilizing the foot on uneven surfaces.  When the foot turns excessively in (i.e. attempt at ankle sprain) these tendons contract and stabilize the ankle so that it does not twist too far in.   Tendons are covered by a ligament called the peroneal retinaculum.  It is a strong ligament that connects the outer leg bone (fibula) to the heel (calcaneus).  The ligament covers the peroneal tendons and helps keep them in a groove behind the fibula.  Under normal circumstances it helps to allow the tendons to contract with extremely high forces without dislocating.  Without this ligament restraint, the muscle tendon unit cannot generate enough force during activity.  If the tendons dislocate, they do not have a normal mechanical advantage and they become weak and painful and tears often develop in the tendon. 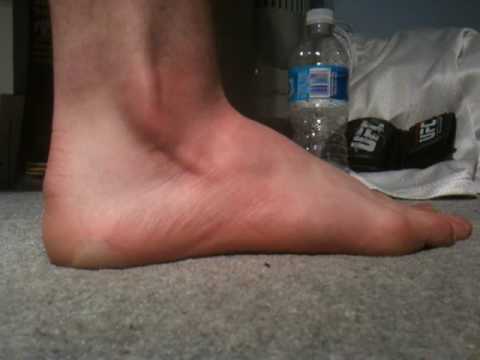 Pics of repair of peroneal retinaculum for dislocating peroneal tendons.

The sutures can be seen prior to repair.

The retinaculum is repaired through drill holes in the fibula and the sutures are woven through the bone.

Picture of retinaculum after complete repair.

Below are images during surgery of a procedure called fibular regrooving. The peroneal tendons course behind the fibula and when they sublux they slip out of the natural groove in the bone that may be too shallow. During the procedure the groove is deepened to allow the tendons to sit in the groove without slipping out and thus correcting subluxation of the tendons. The first picture shows a burr creating the groove deepening and the second picture is the completed groove.

These are intraoperative pics of a woman who traumatically dislocated her peroneal tendons in a fall.

This is a pic of us relocating the tendons.

The following pic is of us debriding the side of the fibula to allow the ligament and tissue to connect to the fibula during healing so the tendons do not dislocate.

This is a pic of the suture passing through the fibula to attach the retinaculum and tissue so the peroneal tendons do not dislocate or sublux.

This is a final pic of the repair