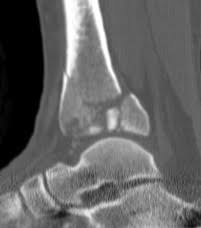 Post-surgical repair of the fracture with screws and plates used for fixation to peicemeal the shattered bone fragments back together. There are various types of fixation that a surgeon can use for this type of procedure. It depends on which devices work best to accomplish the goal of good reduction and re-alignment of the fragments as close to their original position as possible. Pilon fractures are very complex injuries.  This type of fracture involves the distal tibia and invades the ankle joint.  They are usually associated with a fibular fracture.  Common etiologies include car accidents, falls from heights and skiing accidents.  These types of injuries usually are treated surgically due to the involvement of the joint surface, although some are either well aligned or so severe that they are treated non-surgically.